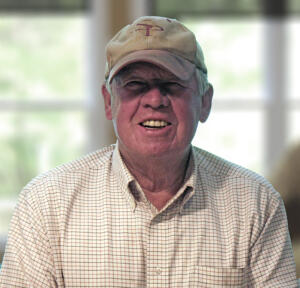 Dave Roberts was born and raised in Illinois. He got his first calves when he was 10 years old for his 4-H and FFA projects. He had a registered and commercial Hereford bull at the time.

He attended Spoon River College and Western Illinois University where he was on the livestock judging team, member of Alpha Gamma, Sigma Agriculture Fraternity. After college, he married Jenny. Jenny continued her education and Dave took a job at Williams Farms as herdsman for their Polled Hereford herd. Dave and Jenny had cows of their own and acquired property along the way. During this period, Dave served on Western Illinois Hereford board as director and president. He was also director and president of the Illinois Polled Hereford Association. Dave served as beef superintendent of Hancock County Fair, was on Hancock County Beef Board, and these terms as township trustee.

The Williams passed on and Dave and Jenny moved to Alabama in 1998. Since then Dave has had the honor of working with Teddy Gentry and his South Poll cattle. He also worked for Tennessee River Music, Genex Corporation, and Lookout Mountain Genetics.

Dave and Jenny have three children who have all grown up and became involved in agriculture in one way or another. Sean is in meat products development for Tyson Foods and their subsidiaries. Sara and her husband have a farm in which they have cows, hogs, and have put up some grain bins. Jamie farms and raises grass and forage seed here in Alabama. Jenny is the director of Religious Education at church, but is soon to retire. Our family has a partnership operation in Illinois where they raise South Polls and Herefords.