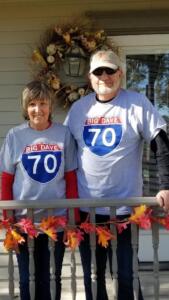 Dave and Beth both grew up on registered Guernsey dairy farms and Dave continued with registered Holsteins for 20 years until 1995 – Beth joined him in 1992. After selling the Holsteins, they transitioned to commercial cow-calf with an emphasis on grass finishing genetics. Unhappy with the availability of grass genetics in the mainstream breeds, they finally investigated the South Poll breed and realized it was exactly what they were striving for. They wanted to keep the good maternal grass finishing genetics they had developed while reducing mature weights and add value to their cows through registration, so they decided that the South Poll breed up program was the most economically feasible method to achieve their goals. A trip to Bruce and Sunshine Shanks’s ranch to buy semen and look at cows ensued and they were on their way. It didn’t take long to realize that the whole herd needed to transition to South Poll quicker than AI would allow, so they bought their first South Poll bull from Ralph and Jerry Voss and as a result, except for some older cows, their herd has become almost entirely South Poll influenced. Many thanks to all the great South Poll folks who have helped and inspired over the past few years. If you find yourself in Central Kansas, come visit and look at cows!