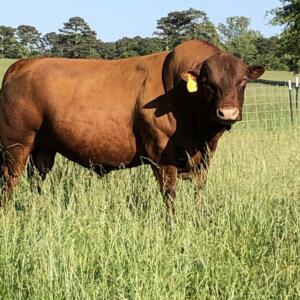 We began raising South Polls in 2015. In fact we purchased our first SP’s at the 2015 Field Day. Originally from KY and having grown up around cattle I began thinking about revisiting the practice as I was nearing retirement. While I wasn’t positive on the specific breed I wanted to raise, I was positive I didn’t wish to raise Black Angus as my family had done in KY. After researching various breeds, and with the help of my older son Josh, we settled on South Polls. This decision was not made hastily nor without many hours of research coupled with visits with Sumner Farms and eventually Dave Roberts which were both very helpful. From the research and meetings with other SP produces it became clear.

Roll forward six years and we couldn’t be happier with our decision. We run over 100 SP’s today between our two farms and I’m yet to find a single bad trait in these animals. I could write several paragraphs on all the qualities I like in them but will simply say the following. What Teddy Gentry set out to accomplish was clearly achieved and I have made that statement many times. If your desire is to raise cattle and make a profit then I’d encourage anyone to strongly consider this breed of cattle. I can tell you for certain this will be the only breed of cattle Creech Farms raises.