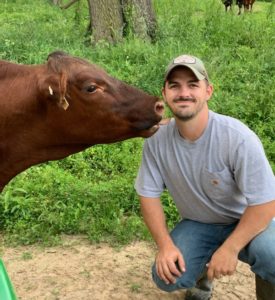 Our family farm was originally established in 1836 as Sunnyside Farm when the Camm Seay family moved to the area from Amherst, Virginia. Mr. Seay's eldest son, Abraham Jefferson Seay managed the farm along side his mother Lucy after his father's passing. Abraham eventually left the farm to serve in the Civil War and was later appointed to the Oklahoma Supreme Court by President Benjamin Harrison before being elected to serve as the state's second governor in 1892. After several changes of ownership the farm was purchased by Gerhard Mebruer in 1940 and was operated for decades as a crop, beef, dairy and hog farm. In the mid 1960s the farm shifted focus to raising mixed breed hogs and Hereford cattle. In 1997 the last hog left the Mebruer family farm and Angus cattle were introduced to our operation. It wasn't until a chance meeting with Ralph Voss in 2011 that the idea of raising grass fed beef utilizing the South Poll breed was considered for our farm. I had decided to skip my college course for the day to attend a cattle pasture walk close to my hometown with a friend of mine and our agriculture professor, Dr. Bruce Shanks. The pasture walk and measuring exercise was hosted by Ralph Voss and he and I hit it off immediately while discussing the South Poll breed. The following day I received a phone call from Ralph inquiring whether I'd be interested in working for him on his farm. I jumped at the opportunity to work with Ralph and this very interesting breed of cattle. Even my wife will agree that THIS was the best decision I've made to date.....to skip school to learn about a cattle breed completely foreign to me and to accept a job offer from a man who runs around with a hand trial digging through cow pies looking for dung beetles. Needless to say the wife thought I was nuts but encouraged me to absorb as much knowledge as possible. The hard part would be convincing my grandpa and dad that the South Poll breed was the breed I intended to invest my future in. In 2014 the first two South Polls made the move to our farm. The following year three more joined the small red herd. Grandpa and dad looked at me as if I had lost my mind spending big money on such a little cow. Then the first crop of calves hit the ground and we watched them grow and flourish on our farm alongside our Angus cattle. Slowly but surely grandpa and dad grew to respect the little red cow and today our farm runs a herd of 50 South Poll cows. In 2020 the family farm was renamed Indian Creek Farms after the beautiful spring fed creek that winds its way through the farm and into the Maries River. We encourage any interested in the South Poll breed to stop by the farm to discuss our operation here in Rich Fountain, Missouri.